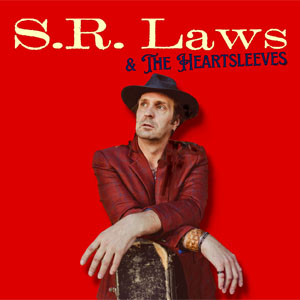 S.R. Laws is an American singer/songwriter, musician and recording artist inspired by storytellers like John Hiatt, Ron Sexsmith and J.J. Cale. He combines influence from songwriters such as Chuck Prophet and Jackson Browne with early life experiences wandering the train tracks through wheat fields and smelling the fruit ripening in the orchards. Through forthright lyrics that are personal and earnest, this artist composes “lyrical pictures,” taking snapshots from the most common walks of life filtered through his own joy and tribulations. S.R. Laws captures time in the imagery of a journeyman’s perspective; from the mother working behind the bar every night, the multicultural kitchen workers to your dart-playing uncle and his friend, the jukebox repairman. It is through uplifting songs and heartfelt-inspiring lyrics that allow S.R. Laws and his characters to “break the ice” with his toe-tapping crowd. Scott’s recent release “A.M. Sessions” hitches all these characters together in the carnival of life and the cavalcade of hits and misses.
https://srlawsmusic.bandcamp.com https://www.youtube.com/channel/UC2Cs26IxEW3jtLVKHcArEHQ https://www.instagram.com/srlawsmusic/ https://www.facebook.com/srlawsmusic/ https://www.srlawsmusic.com https://twitter.com/SRLaws2

Forever Goldrush formed in 1997 when a when a group of childhood friends from the California gold-country built their passion for country, folk, and blues into an outfit built on literate songwriting and wiry, powerful musicianship. Singer/songwriter Damon Wyckoff, guitarist Josh Lacey, bass player Mason DeMusey, and a cast of drummers sharpened their rowdy roots rock into a melodic torch and twang debut titled “Unknown Territory” (1999). Unknown Territory garnered extensive praise. Soon, Forever Goldrush (sentimental reference to the unique region of California they call home; and maybe Neil Young??) started touring extensively, landing opening spots with Train, the Drive By Truckers, Marshall Crenshaw, Neko Case, and others. In 2000, the band signed a record deal with Headhunter Records/Cargo Music and released their Sophomore album “Halo In My Backpack” (4 stars in No Depression). In 2003 as Cargo Music filed for bankruptcy, Forever Goldrush began work on a record that would be titled “The Amador Frequency”. For many reasons (the creation of the Amador Frequency and the loss of its outlet among them), principal songwriter Damon Wyckoff left the band’s home-base of Sacramento CA to return to the foothills and the Amador Frequency was shelved. A dense, synth-laden, sonically adventurous record, The Amador Frequency would remain hidden for the better part of a decade. Test Pattern records caught wind of the record’s existence and released the album in 2011. Riding the momentum of a fresh release the Band entered Sylvia Massey’s recording Studio in Weed CA. and worked with Glenn Sawyer and Rich Veltrop to create “Chambers.” Chambers, released on a limited-scale in 2012, saw the band return to its roots-based rock and roll roots and features some of the band’s most iconic songs. At this time guitarist Josh Lacey returned to his homestead in the mountains of North Carolina and the Band once again went dark. In late 2019, circumstance would find Josh and Damon together again living and jamming in the Northern California Gold Country. The creative need to write and record songs being an ever-present part of their lives, they re-lit the lantern of Forever Goldrush as their vehicle to do so. In 2021 the Band reissued their entire back catalog digitally and brought on a new rhythm section in Travis Quinn on drums and Evan Bailey on bass. Travis and Evan, both phenomenal songwriters and multi-instrumentalists, were in the Sacramento-area band Sun Valley Gun Club. Forever Goldrush have re-kindled the excitement of fans new and old through spectacular live performances and a routine Sunday morning internet live-stream. The Band is in the process of recording its fifth album with plans for a summer 2022 release.
https://www.twitch.tv/forevergoldrush_96 https://www.instagram.com/forevergoldrush.96
Recommended If You Like:
Todd Snider, John Hiatt, Neil Young, Bruce Springsteen, Tom Petty, Jackson Browne, Sean Hayes, Tim Bluhm